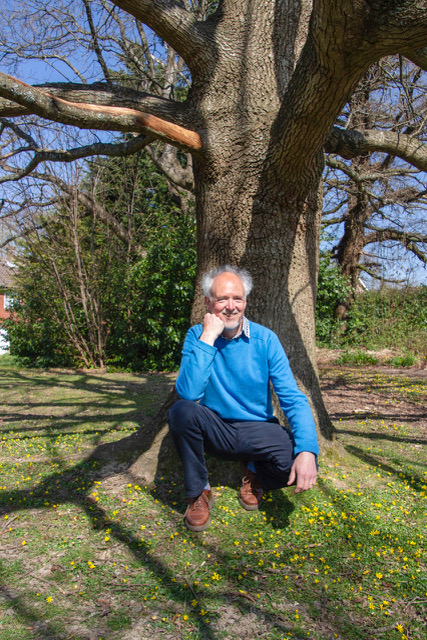 Steve Crowther: Can you tell us something of your background?

JB: As far as music is concerned, I was lucky to have a father who loved music, and whose own mother was a composer of Victorian parlour ballads (I never knew her).  My teacher at grammar school was excellent: very much his own person, and always encouraging me to think independently about what kind of music I wanted to write. Later, I read English and Music at Cambridge, and then spent a year studying composition at the Guildhall School of Music and Drama – a formative period.  Playing the fiddle in a folk rock band was also part of the picture.

SC: Can you describe the programmed works to us?

JB:  It’s a bit of a hybrid.  In a way, it’s a very classical piece, enjoying some of the traditions of structure and texture in music for string quartet.  For example, the first movement is a combination of ‘ordinary’ first movement and scherzo.  But the slow second movement gives the piece its subtitle, ‘Earth and Angels’ and so has a programmatic aspect to it.

SC: Do you write at the piano, do you pre-plan? Can you describe the compositional process?

JB: I do write at the piano, yes, but not always – I often start something with an idea or two that I sketch away from the piano.  I usually hear these ideas in my head, and start working with them if they seem interesting. Then it’s a question of deciding how this material wants to develop.

SC: Is it important to know the performers? Do you write with a sound in mind?

JB:  It’s always good to know the performers, and can be wonderful and inspiring.  But it isn’t an absolute necessity.

SC: How would you describe your individual ‘sound world’?

SC: What motivates you to compose?

JB:  It’s not something I actively chose to do: I’ve done it for as long as I can remember.  But I do choose to pursue it, and that is partly because music can reach, and express, a part of our humanity that nothing else can reach. Composing is one way of celebrating that fact.  Music is about connecting things – all those disparate elements that come together in some form of harmony.  For me, that is also a reflection of nature: the word we use to describe the profound interconnections between everything on this planet, including ourselves.

SC: Which living composers do you identify with or simply admire?

JB:  I don’t identify with any one composer, and I admire many, but in this context I would mention David Matthews (to whom String Quartet no.2 is dedicated). I admire his range, his capacity to create a narrative in the flow of his music, and his recognition that ‘traditional’ forms can be an expressive tool: they need not be a conventional straitjacket.

SC: If you could have a beer and a chat with any composer from the past, who would it be and why?

JB: Beethoven – as long as I got to take away the Conversation Book, in which case it would be a beer and a take-away.

SC: Now for some desert island discery – please name eight pieces of music you could not be without, and then select just one.

JB:  Empire of Light (probably because I’ve just seen it)