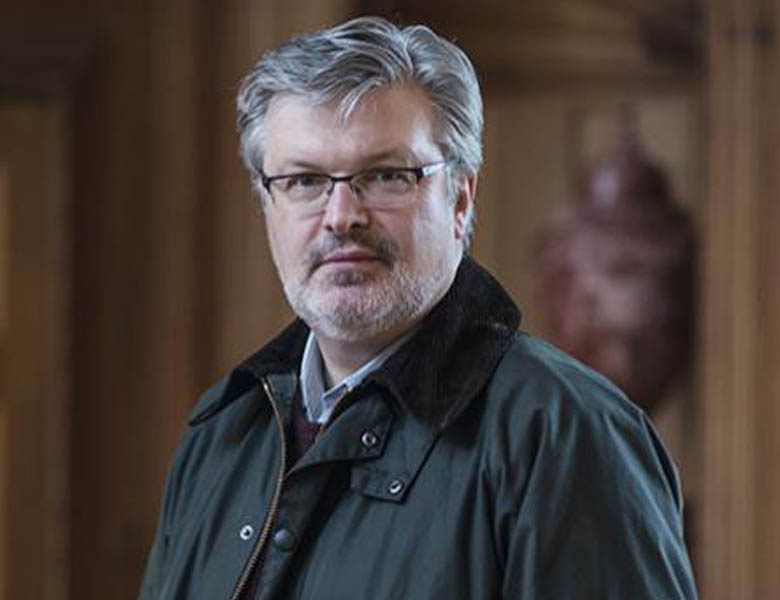 James MacMillan read music at Edinburgh University and took Doctoral studies in composition at Durham University with John Casken. After working as a lecturer at Manchester University, he returned to Scotland and settled in Glasgow. The successful premiere of Tryst at the 1990 St Magnus Festival led to his appointment as Affiliate Composer of the Scottish Chamber Orchestra. Between 1992 and 2002 he was Artistic Director of the Philharmonia Orchestra’s Music of Today series of contemporary music concerts. MacMillan is internationally active as a conductor, working as Composer/Conductor with the BBC Philharmonic between 2000 and 2009, and appointed Principal Guest Conductor of the Netherlands Radio Chamber Philharmonic from 2010. He was awarded a CBE in January 2004.

In addition to The Confession of Isobel Gowdie, which launched MacMillan’s international career at the BBC Proms in 1990, his orchestral output includes the percussion concerto Veni, Veni, Emmanuel, premiered by Evelyn Glennie in 1992 and which has since received over 400 performances and has been programmed by leading international orchestras and conductors including the New York Philharmonic under Leonard Slatkin, the Philadelphia Orchestra under Andrew Davis, and the Detroit Symphony under Neeme Järvi. MacMillan’s music has been programmed extensively at international music festivals, including the Edinburgh Festival in 1993, the Bergen Festival in 1997, the South Bank Centre’s 1997 Raising Sparks festival in London, the Queensland Biennial in 1999, and the BBC Barbican Composer Weekend in 2005. A documentary film portrait of MacMillan by Robert Bee was screened on ITV’s South Bank Show in 2003.

Works by MacMillan also include Seven Last Words from the Cross for chorus and string orchestra, screened on BBC TV during Holy Week 1994, Inés de Castro, premiered by Scottish Opera and toured to Porto in 2001, a triptych of orchestral works commissioned by the London Symphony Orchestra: The World’s Ransoming, a Cello Concerto for Mstislav Rostropovich, and Symphony: ‘Vigil’ premiered under the baton of Rostropovich in 1997, and Quickening for The Hilliard Ensemble, chorus and orchestra, co-commissioned by the BBC Proms and the Philadelphia Orchestra.

In terms of recordings, the Koch Schwann disc of The Confession of Isobel Gowdie and Tryst won the 1993 Gramophone Contemporary Music Record of the Year Award, and the BMG recording of Veni, Veni, Emmanuel won the 1993 Classic CD Award for Contemporary Music. MacMillan discs on the BIS label include the complete Triduum conducted by Osmo Vänskä, the clarinet concerto Ninian and the trumpet concerto Epiclesis. A MacMillan series on Chandos with the BBC Philharmonic conducted by the composer includes The Berserking, Symphony No.3: ‘Silence’ which won a Classical Brit award in 2006, and Quickening. Other acclaimed recordings include Mass and Seven Last Words from the Cross on Hyperion and discs on the Naxos, Black Box, Coro, Linn and LSO Live labels.

Recent MacMillan works include Piano Concerto No.2 first performed with choreography by Christopher Wheeldon at New York City Ballet, A Scotch Bestiary commissioned to inaugurate the new organ at Disney Hall with soloist Wayne Marshall and the Los Angeles Philharmonic conducted by Esa-Pekka Salonen, and The Sacrifice premiered and toured by Welsh National Opera in 2007. His St John Passion, co-commissioned by the LSO, Royal Concertgebouw Orchestra, Boston Symphony Orchestra and Berlin Radio Choir, was premiered under the baton of Sir Colin Davis in 2008. 2010 featured the premieres of two new concertos; a violin concerto for Vadim Repin co-commissioned by the LSO, Zaterdag Matinee and Philadelphia Orchestra and an oboe concerto toured by Nicholas Daniel and the Britten Sinfonia. 2011 highlights include premieres of MacMillan’s Piano Concerto No.3 for Jean-Yves Thibaudet and the Minnesota Orchestra and a new one-act opera, Clemency, commissioned by the ROH2, Scottish Opera, Boston Lyric Opera and Britten Sinfonia. Current commissions include include festive settings of the Gloria (to mark the 50th anniversary in 2012 of the consecration of Coventry Cathedral) and Credo, a full-evening chamber oratorio and a large-scale orchestral work.