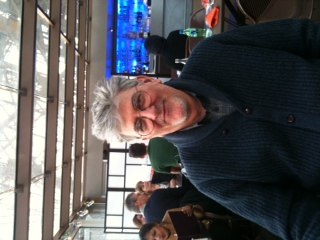 Peter became Director of Late Music in 2009, a period of major transition for the organisation. We had decided to accept that the previous incarnation, The Late Music Festival, was not working, it had lost focus and direction. Acting on David Power’s view that we needed to change from a festival to a concert series, meant that we had to move from the Early Music Centre.  We decided on the Unitarian Chapel. However, it meant losing an excellent, firmly established venue, professionally run and with its own publicity machine. The Chapel had none of these attributes, it didn’t even have a piano. Ever practical and pragmatic, Peter arranged for the Chapel to “house” a magnificent concert grand piano from a moribund Guildhall.

Piano in place, Peter led on establishing a series of eight evening concerts plus lunchtime recitals to take place on the first Saturday of the month. The concerts not only continued to embrace new music, but at affordable ticket prices. We also embarked on a philosophy of non-elitism: there were pre-concert talks given by the composers having new pieces with complimentary glasses of wine. This was to be followed by an informal Q&A, thus establishing a friendly, engaging  concert environment. Peter also instigated a lively and improved online presence including recordings so audience members could listen again to new pieces and become familiar with them. Peter also realised that we had to transform Late Music into an established, quality identity. As well as continuing to invite world-class performers, he decided we should commission high-profile composers: examples being Judith Weir, Michael Finnissy, Gavin Bryars, Errollyn Wallen, Sadie Harrison, Michael White and Frederic Rzewski. Quite rightly, Peter insisted on gender equality. Inviting Nicola LeFanu to be patron, they oversaw a programming blueprint of 50% male/50% female composers and performers – the 2016 season – entitled Women Hold up Half the Sky – did just that and it remains a central concern of our programming.

With the cancer diagnosis, Peter gave up his role as Director, but continued to act as a sounding board for new ideas, giving advice and support right until his premature death. Peter was a true friend to both Late Music and, indeed, to myself personally. We miss him.