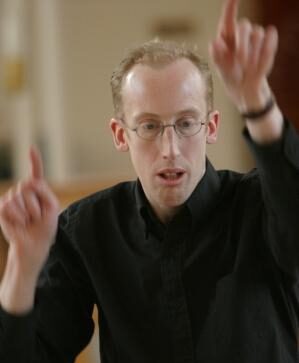 Sam Laughton was organ scholar of Sidney Sussex College, Cambridge, where he read music. He now juggles busy careers as both a barrister and musician. He is musical director of the Elysian Singers, the Trinity Camerata and the Craswall Players, as well as trustee of two musical charities. Sam’s repertoire is very wide, ranging from the medieval period to the operas of John Adams and Verdi, and the oratorios of Elgar and Mendelssohn to the orchestral fantasies of Charles Ives and Percy Grainger.

He is in demand as a guest conductor, working with such orchestras as the Oxford Sinfonia, Kensington Chamber Orchestra, the Kew Sinfonia, the Orchestra of the City, the Crendon Chamber Orchestra and the Royal Orchestral Society. He has also worked with groups as varied as Oxford Philomusica, the Joyful Company of Singers, ENO Baylis and Garsington Opera.